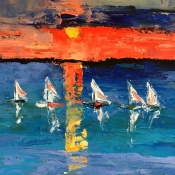 Zdeňka Tylečková (Tyleček) was born in Brno, where she in 1967 completed studies at School of Applied Arts. Two years after graduation ball, she got married to her school mate Jiří Tyleček (Tylek). They emigrated to France already with two children in 1983.
She lives and creates partly in Paris - where she and her husband had their own gallery.

Tylek´s and Tyleček´s output is represented in all over the world. She paints landscapes and still-life arrangements. Tylek and Tyleček are highly respected and were awareded for example a diploma "Arts, Science et Letters".

In Japan, you can find their work in Mihama Museum.