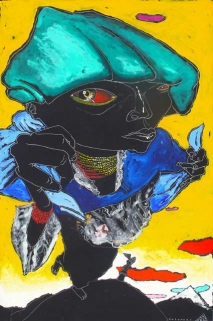 In 2010, the Galerie La Femme celebrated its tenth birthday and gave itselves a trip to Ecuador, specifically accepted the invitation of Ms Mayry de Casares to her house Casa San Marcos. In the historic center of the capital city of Quito the artists presented their works which they brought to Ecuador for the first part of the exhibition.

Here painters made paintings inspired by local people, nature, atmosphere, and by all the colors around. Mona Lipi here led a ceramic workshop  to local students and Daniel Krejbich had a solo exhibition of his paintings and architectural projects Museo de Architectura. Again, there was not lack of a musical part of the program. Expedition was complemented by a singer Radka Fišarová and Zuzana Norisová who sang Czech and Slovak folk songs in the church of San Marcos. Radka Fišarová had great success with the songs of Edith Piaf, which surprisingly many Ecuadorian people knew. As a reward the entire gallery mission made several trips to the Galapagos Islands, which were one of the greatest experiences and inspiration for all.


Sample of works created in Ecuador